Casual Ownership, the Colangelo Era, and its correlation to disgruntled superstar Ben Simmons. (REPOST FROM OCT 2021)

I was at a high school graduation party in Montclair, NJ when the 2012 76ers lost in the semi finals to the Celtics. My Yardley and Newtown guys and I were having to regulate our random embraces of one another over the slow paced game in fear of losing social klout going into the summer. As the rest of the party burped up bankers club and placed early predictions on where they'd be in their career right out of college, we held each other through another brutal early exit.

After schlepping through the coin toll with two dimes, and I kid you not, a metal fork, I cruised home the next morning fantasizing about a sixers team that had a big three, maybe even a power 4, with the emergence of their own talent in Rondo. Then, I began ruminating on why the Sixers couldn’t ultimately acknowledge they wouldn’t transcend a mediocre roster and a mediocre coach. It felt like nothing short of a resolved recklessness to win at all costs could change this team. 2013 just came and went; Sixers fans watched alongside Andrew “Pride of Plainsboro” Bynum as we just delayed the inevitable, crippling reality. The organization needed way more than a new middling superstar or a trendy coach. It needed that reckless resolve towards a championship. 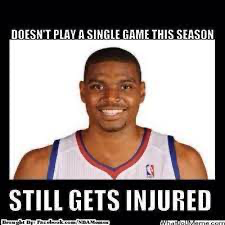 (FYI Andrew Bynum and I grew up less than 5 miles apart, I’d love to have him on the podcast. He’s also only 33, and if he plays golf I'll leverage Dale's coaching skills to make it happen)

As the season tips off in 48 hours, it’s vital to understand why the 76ers are where they are today with only 2 semi final losses to show for the last 8 seasons. My question is, could Joshua Harris’s casual acceptance of the Colangelo's, the NBA's most self-serving family, be the first domino?

In 2015, Joshua Harris confirmed from meetings with Adam Silver that the Sixers would hire Jerry Colangelo as chairman of basketball ops. All you need to do is watch of future hall of famer Kevin Love to understand the Colangelo brain.

Joshua Harris is a brilliant businessman that owns the NJ Devils and partner in Crystal Palace F.C. Joshua Harris understood the realities Adam Silver painted in the world of financial repercussions that could hamstring the team in the future. Harris decided it was good for business to blindly listen to the commissioner. Then he decided it was good for Hinkie to step down, and Bryan, son of Jerry Colangelo, to move in as general manager. Listen is you’re an NBA fan, read these tweets and quickly remember exactly who is Bryan Colangelo:

No one can be ready for something like this. But Harris, as far as I can understand, could have kindly and politely told Silver to pound sand. The Sixers are three times their worth since the hiring of Jerry Colangelo, and for all intents and purposes the process was good for the NBA and pro sports markets. Yet, this reality felt doomed, as Harris, an absurdly brilliant businessman, was perfectly content to react to the needs of his team instead of proactively ensuring their long term success together. This is a role he wants to have a part in.

Unfortunately, accepting Jerry onto his staff was the end of the road for Sam Hinkie, the visionary behind "The Process". Harris allowed Colangelo to set the roster, perpetuating the narrative that for the team to win, an entire roster of shooters would be built to accommodate rookie of the year Ben Simmons' game style, and in turn completely free up Joel Embiid. Sadly this failed, leading to Brett Brown begging Ben Simmons to shoot the ball, and going as far as to threaten his lack of shooting with consequential benchings. Yet, Ben’s simply been playing his game ever since he got to Philly, and it is short sighted to assume the already elite superstar would change his style so drastically when his style is producing success.

Ben has been first team all defense, a three time all star, and yet should we be surprised he doesn’t like the house that’s been built for him in Philly? Ben Simmons is disgruntled with the critique he’s faced as a point guard with no shooting capability. It's harping on a negative that is clearly outweighed by positives. But Bryan Colangelo built a roster that went just far enough into the playoffs to cement the critique. Ben’s camp is clear they’ve never ultimately seen it that way, while the narrative only gets stronger against him that he has to shoot, and his ego is now ruining his career and reputation. I think it’s a very confusing and infuriating chapter for Ben Simmons, and wish him well if we get a trade done.

So I simply invite Sixers fans into another season of NBA basketball. I think this roster and staff will produce a lot of wins, but it will be overshadowed by the repercussions of the Colangelo era. The professionally immaturity that took place between 2015-2018 within Sixers ownership cemented Ben Simmons lack of one skill as the scapegoat for the team's playoff miseries.